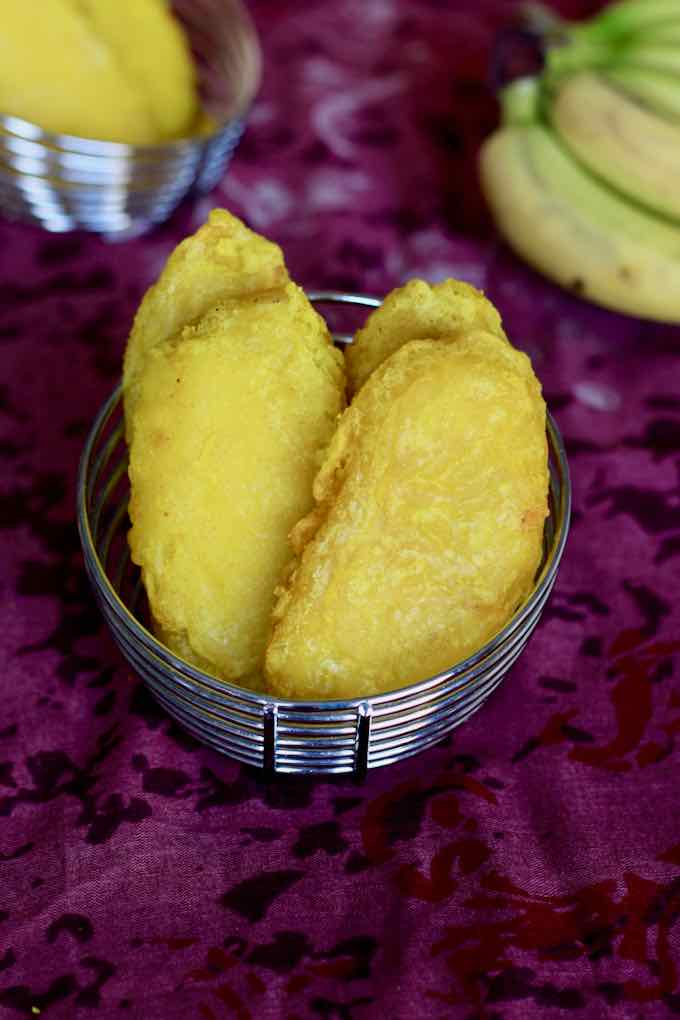 Chuối chien are fried bananas and they are, without a doubt, one of Vietnam’s most popular street food desserts.

In Vietnamese, chuối means banana and chiên means fried. These delicious fritters, dubbed the Vietnamese banana pancake, are one of the most popular traditional sweets in the country. They are incredibly crisp, slightly sweet and certainly a little fat. Chuối chiên are from the Vietnamese countryside.

How to make chuối chiên?

The dish is made with inexpensive and popular ingredients for a very simple recipe. Apart from the main ingredient, banana, the dough, in the most classic version includes rice flour, wheat flour, sugar and salt. Some recipes flavor chuối chien with coconut milk, or butter, wine, or honey, and it may also happen that eggs are added to the dough.

To prepare the chuối chiên, people use mini-bananas, also called baby-bananas, or even Siamese bananas (chuối xiêm or chuối sứ), that can generally be found in most Asian supermarkets. However, you can use any type of mini banana or classic banana.
It is imperative that the banana is ripe (but not overripe) because it is at its sweetest point and is easy to work with.

The essential technique of this recipe is to gently flatten the banana without crushing it, ensuring that it does not break. You can use a small wooden board or a glass. In Vietnam, pre-flattened bananas are sold in all supermarkets.

The history of banana

Banana is one of the oldest fruits, whose existence and importance are confirmed since ancient times. Its geographical origin has been identified in Southeast Asia, in the Malaysian, Indonesian and Philippine jungles, where it is still possible to find many wild varieties.

There are traces of the first bananas in New Guinea around 5000 BC, but they were mentioned in writing in some Buddhist texts for the first time only in 600 BC. Alexander the Great also mentioned it in 327 BC. However, it is probably the Chinese who cultivated bananas for the first time, as early as the year 200.

In 650, the Islamist conquerors brought bananas to the Middle East. Arab traders then spread bananas throughout most of Africa, and from there, bananas spread to Central and South America through explorers in the 1500s.

Where do bananas come from?

Grown in all tropical environments, our favorite fruit comes from countries such as India, Ecuador, Costa Rica, Mexico, Colombia, Thailand, Indonesia, the Philippines, China and Brazil where, thanks to the high temperatures, it is available all year long.

India is certainly the largest banana exporter in the world. In India, banana was considered to be “the fruit of paradise”, and the Hindus claim that Eve offered Adam a banana, the famous forbidden fruit of the Garden of Eden. In Sri Lanka, it is mentioned that banana leaves were used to dress Adam and Eve as they were driven out of the earthly paradise. This is probably the reason why the other name of the plantain, extremely popular in the region, is musa paradisiaca, or the muse of paradise.

What are the main varieties of banana?

Despite 1000 to 1500 varieties growing worldwide, subdivided into 50 groups, there is not a lot of variety in the bananas that are sold in our markets. The fragility of this fruit during its transport is the primary cause. 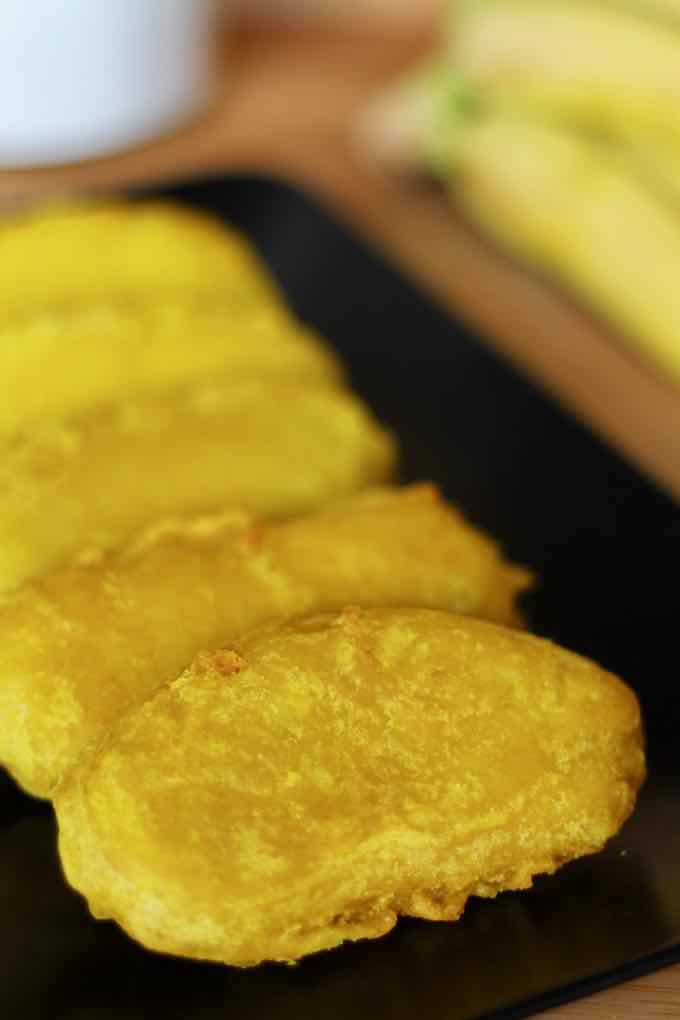 – The Cavendish banana is the most popular dessert banana in the world (97% of the world banana trade). We distinguish the Great Dwarf (Giant Cavendish) and the small dwarf (Dwarf Cavendish), the term dwarf being related to the size of the pseudo-trunk. Currently, it is grown in the Caribbean, Central America and the Canaries.
– The banana frécinette (or freyssinette), or “sweet fig” banana, smaller than the Cavendish, is a dessert banana spread all over the world, although it is more popular in Asia and Africa.
– The pink banana, a medium-sized dessert banana with pink-red skin, has a very fragrant white flesh. It comes from the West Indies and Central America.
– The Musa paradisiaca, or plantain, a cooking banana, eaten boiled or fried. It comes from Costa Rica, Ecuador, Colombia, Martinique, or Ivory Coast.
– The poyo is another popular dessert banana. It is a sweet fruit that is quite long (about 10 to 12 inches). It usually comes from the West Indies, Ivory Coast, or Cameroon.
– The exotic dessert banana is a very sweet and very small fruit (5 to 6 inches) that comes from Mexico or Colombia.
– The pisang lilin, which comes from Indonesia, is a fruit shaped like an “S”, as big as a finger, with a delicately scented flesh.
– The Mysore, from India, is a dessert banana that is very resistant, with a thick skin and very fragrant flesh.
– The red banana, with several varieties, is a very sweet dessert banana with purplish-red skin. You can notice its maturity when the skin is stained with black. Some red bananas have a slight raspberry taste, and others have an earthy taste. They come mainly from Asia, East Africa, South America and the United Arab Emirates.

To prepare chuối chiên, mini bananas such as frécinette or exotic dessert banana, will work.

The different varieties of baby bananas measure no more than 5 inches and are grown in the tropical countries of South America, the Caribbean, Asia and Africa. When the baby banana is ripe, the skin is bright yellow and has a cream-colored flesh. You will find them on stalls all over the world, also under the name of finger, ladyfinger, lady finger or niño banana.

What are the benefits of banana?

A study conducted in Ireland and published in the International Journal of Cancer found that regular consumption of bananas reduces the risk of kidney cancer because of its high potassium content (only one banana per day provides 400 mg of potassium, that is 11% of the amount needed on a daily basis.

The banana regulates blood pressure because in fact, potassium is able to keep it under control and reduce it, reducing the risk of heart attack and stroke.

Banana reduces cholesterol: it contains phytosterols, molecules that bind cholesterol within the intestinal lumen, preventing its absorption and promoting its expulsion.

Banana regulates the intestine and is rich in fiber and minerals. Banana reduces the risk of anemia. Indeed, iron is essential to the stability of the body’s energy levels and bananas contain a large amount of it.

Banana helps fight against the retention of water: it promotes the elimination of excess liquid and the feeling of swelling with potassium that helps the body to balance the liquids present in our body by counteracting the action of sodium. Just eat two bananas a day before meals to reduce abdominal swelling in 60 days.

Banana is a fat burner: it contains 12 mg of choline, an organic substance that accelerates the process of lipolysis and degrades lipids in the body. It can burn fat if combined with soy, turkey, veal liver and egg yolk.

Banana improves the mood: it contains vitamin B9 and folic acid, two substances that help serotonin, the hormone of good mood, to reach the brain faster.

Bananas also contain tryptophan, an amino acid that can relieve anxiety and reduce insomnia. The fruit also promotes the release of noradrenaline or norepinephrine, the neurotransmitter that regulates the response to stress.

At the end of intense sports training, eating a banana is ideal for recharging your batteries. Thanks to potassium, the muscles regain energy.

Bananas have a satiating power: they contain what is called “resistant starch”, that is able to resist the process of digestion. After eating, we feel full and reduce the amount of fat consumed.

And finally, banana is considered one of the best aphrodisiac foods and certainly not only for its phallic shape! It is rich in vitamin B, potassium, magnesium and many minerals that give energy. It contains an enzyme belonging to the bromeliad family, which increases male libido and fights impotence.

Bananas now have no secrets for you!

These chuối chien were divinely crisp and we ate them in no time. 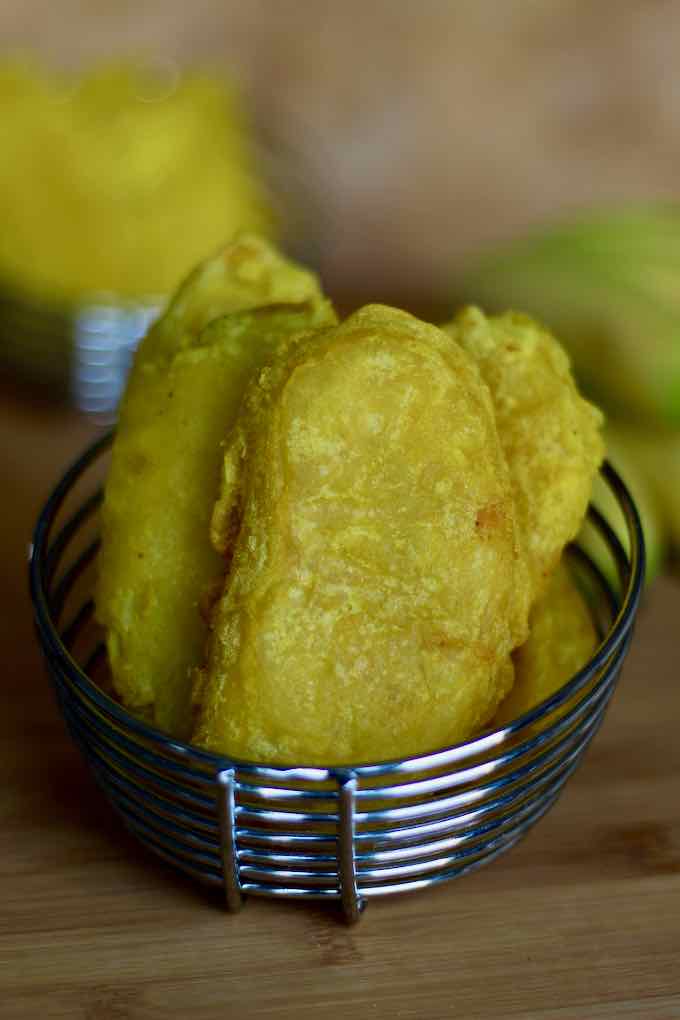 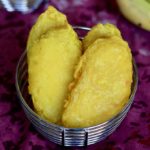 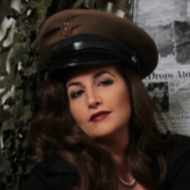