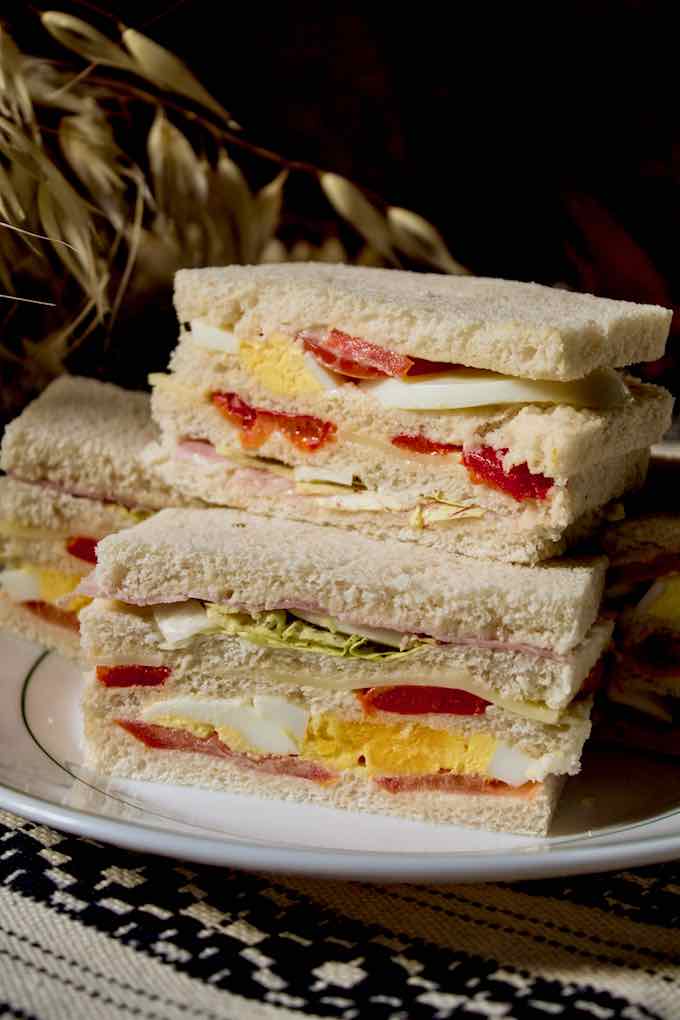 What is a sándwich de miga?

The sándwich de miga is a popular sandwich in Uruguay, Chile and Argentina.

Miga means “crumb” in Spanish, because of the bread used to make it, a white bread sandwich baked in a mold and compressed to be dense and have perfectly regular slices so that it can easily be garnished.

In Uruguay, this sandwich is sometimes called sándwich olímpico (Olympic sandwich). Miga is often prepared in large quantities at receptions or parties. It can be found in all bakeries in the country for a quick lunch or snack. In the evening, most bars also serve it.

It is also used in cold buffets or picnics. It can be prepared in advance, and stored in the refrigerator until consumed and although it contains many ingredients, it remains economical. These sandwiches are suitable for all the family and offer a simple way to make a filling and satisfying meal. 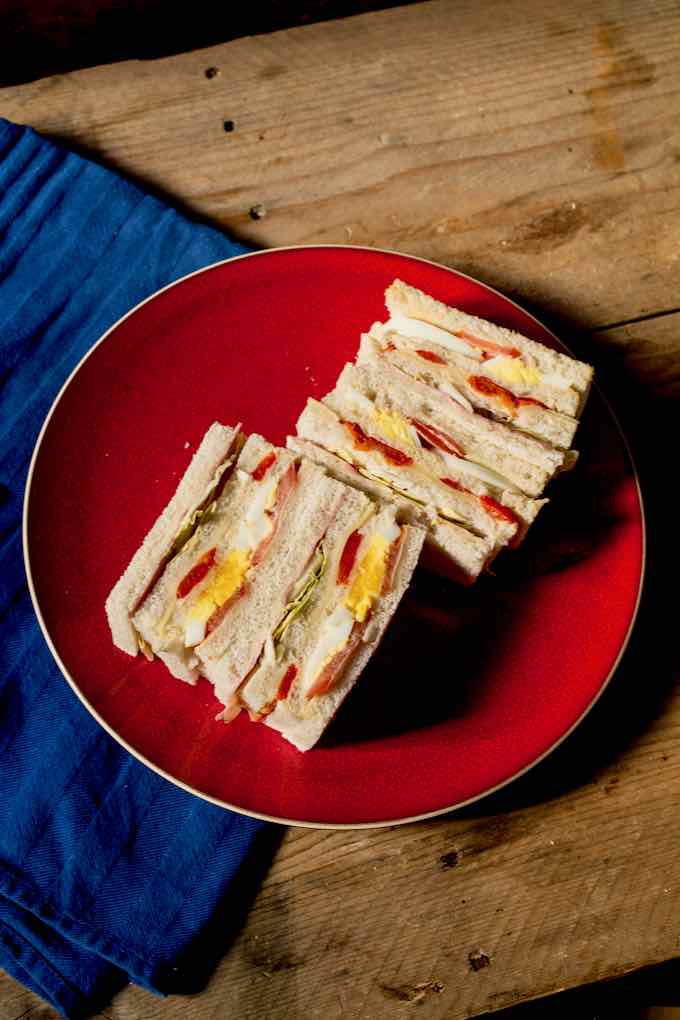 How to make sandwiches de miga?

The ideal way to prepare a large quantity of sándwiches de miga is to have all the ingredients already cut in the right size and stored in small individual boxes before going to work. You can then have the first layers of bread on a board and we begin to garnish them with mayonnaise. This mayo is flavored with the juice of a lime. You then have to superimpose layers of ham, cheese, boiled eggs, and raw vegetables such as lettuce, tomatoes or bell peppers until all the ingredients are gone. Generally, people put three layers, each of them covered with mayonnaise and, they finish with bread that is crushed slightly to press the ingredients. In the case of a complete meal, two sandwiches per person may be sufficient, the large amount of bread and mayonnaise they contain make them quite rich.

What are the other versions of sándwich de miga?

The sándwich de miga can be double or triple layers. It is sometimes actually called triple. It can contain salami or pastrami or cold meats such as roast instead of ham. Ham can be cooked or raw. There are also variants with cold chicken, turkey or tuna, seafood or sardines. You can also add olives, hearts of palm, pineapple, beets, corn, mushrooms, asparagus or nuts. The cheese that is used can also be blue cheese.

In Argentina, mayonnaise is often replaced by lard. There is also the sándwich caliente, very close to the sándwich de miga but with mozzarella, butter and ham. This sandwich is also grilled, hence its name.

In England, the club sandwich, finger sandwich or tea sandwich, based on bread, cucumber and cottage cheese is often served with tea. It is offered in all hotels and is at the origin of the many varieties of sandwiches consumed on the train by Europeans. It comes, just like its South American cousin, with various meats, seafood, raw vegetables or even in a sweet version. In Victorian times, this sandwich was often cut with a decorative cookie cutter to give it a more appealing and festive look in the banquets of major hotels.

In the north of Italy and more particularly in the region of Venice or Turin, you can find the tramezzino, which contains a large amount of mayonnaise to which eggs, tuna or charcuterie are added. The tramezzino can be rolled on itself or crushed by pinching it on the sides to better hold the ingredients inside. Customers usually buy several of them with different fillings, even if the tuna-based one remains their first choice.

In Peru, the triple sandwich is similar to its Uruguayan cousin but often contains avocado, bacon and eggs. This version has become quite popular in the United States.

In the United States, you will find the popular BLT composed of Bacon, Lettuce and Tomatoes, also seasoned with mayonnaise and grilled.

It seems like we all share a common passion for sandwiches made from white and fluffy bread like sandwich bread. And this is not surprising since its sweetness always highlights the ingredients it contains! 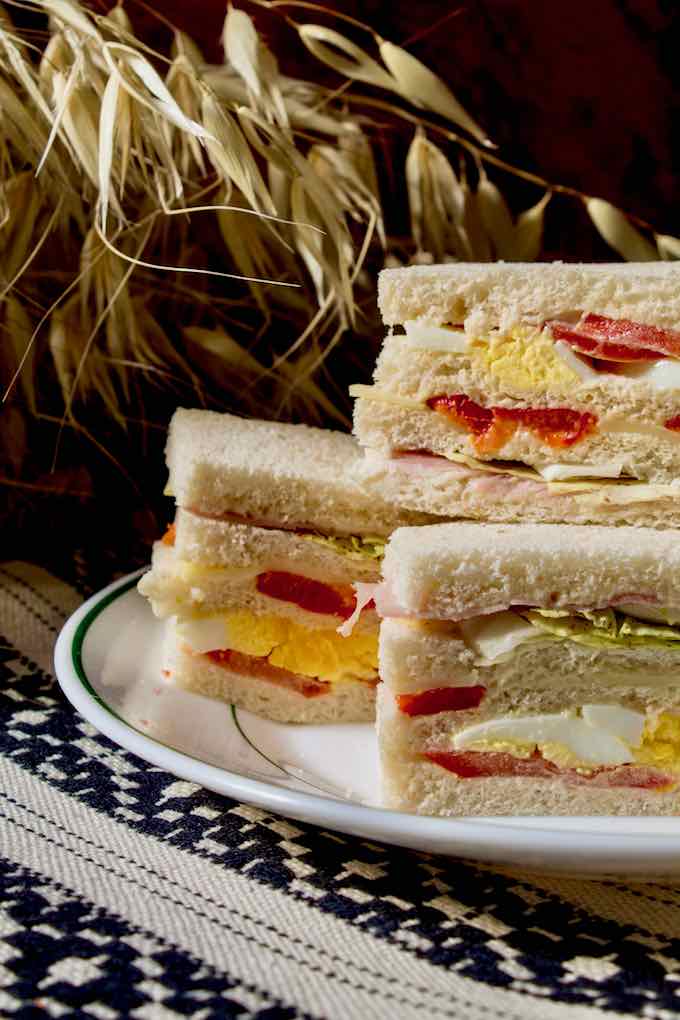 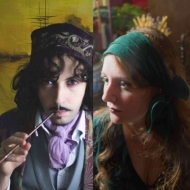