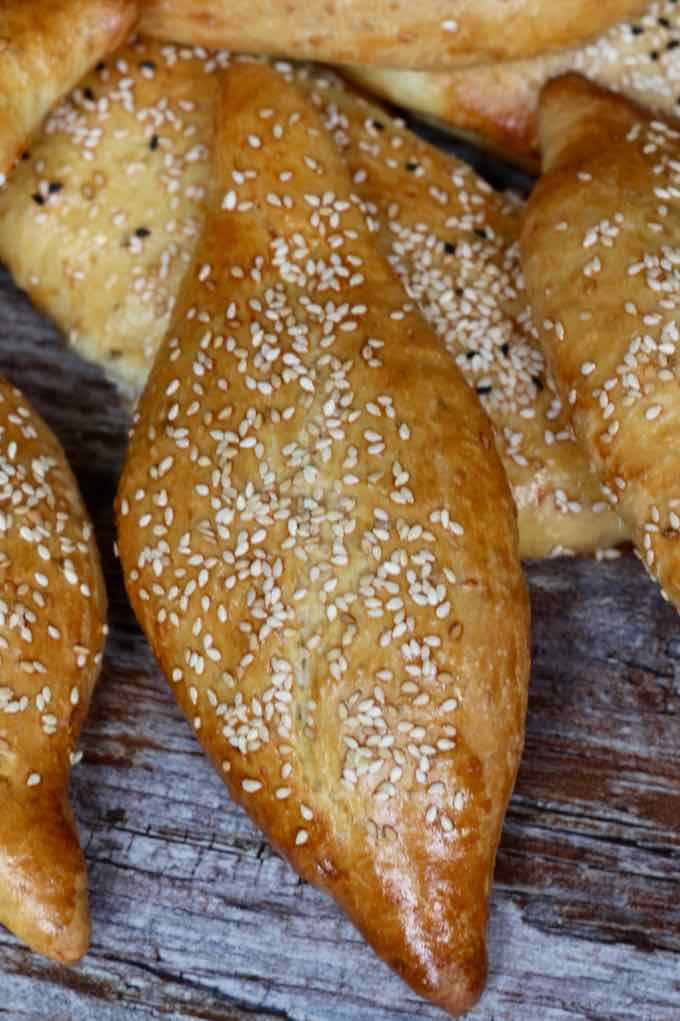 Homemade bread is a simple and quick way to always have a good authentic ingredient on your table and ideal to accompany all types of dishes; let’s go to Iraq to discover its samoon (Arabic: صمون).

It is called samoon but also samoon hahadjra (الصمون_الحجري), which literally means “stone samoon” even if it is traditionally baked in a brick oven, heated by wood fire, just like traditional pizza.

This is a white bread traditionally shaped like a canoe or diamond. It is a little wider than the palm of one hand, widened in the middle, with its two ends tapered and rounded.

Although they were originally shaped in the form of a canoe or diamond, over time, some breads baked in municipal brick ovens in Iraq have taken other forms but they are still called samoon.

Samoon is Iraq’s most popular bread along with khubz.

It is usually served with a variety of dishes such as hummus, shish kebab or shawarma.

It is also known in all the Levant countries. Variants exist in Syria and Lebanon.

It can also be found in other Middle Eastern countries such as Kuwait and Saudi Arabia.

What is the origin of samoon?

The name is a word borrowed from Turkish somun, which is itself coming from the Greek word psomos, a generic word for bread.

The samoon would seem to have emerged under the Ottoman Empire. A similar variety was known long before the eighteenth century, and was described as round and fleshy, according to Marianna Yerasimos, a graduate of the Faculty of Letters of the Department of Psychology in Istanbul, and author of the famous 500 Years of Ottoman cuisine, published in 2004.

In Baghdad, in the Middle Ages, brick oven bread, called khubz al-four (or furrani), had a shape similar to that of the Ottoman somun. The diamond shape would have been, it seems, developed by Iraqi bakers of the early twentieth century.

Other sources say that the samoon’s origins are Georgian. In Georgia, a bread similar to samoon is known as shotis puri.

Samoon most probably arrived in Iraq in the 1950s and its origins are Georgian. In Georgia, samoon was known as shotis puri.

It arrived in Iraq with the migration of many Armenians, who also made this bread, in Mesopotamia in the late 1940s.

The first person to produce samoons in Iraq was an Armenian named Simon in the Bab al-Agha region. Simon (Samoon in Arabic) gave his name to the bread, which immediately became popular throughout Iraq.

The Assyrian community in Georgia since the 6th century AD has brought many customs and traditions to Iraq, and samoon baked in a stone oven was one of the most important.

Shotis puri (bread on fire) of Georgian cuisine (პური) is just like samoon, made of wheat flour and, like samoon, it traditionally has the shape of a canoe, like khachapuri that comes from the word khacho which means cheese (cottage) and the word puri which means bread.

How to make samoon

The main characteristic of Iraqi samoon, in its most traditional form, is that it is cooked in a stone oven called furn (plural: afraan), since the beginning of the Middle Ages.

For homemade bread, what would be closest to this furn would be a refractory baking stone.

Our expert in Iraqi cuisine on 196 flavors, Nawal Nasrallah, award-winning researcher and culinary writer, expert in Middle East and Iraqi culinary cultures, offers, in her book on Iraqi cuisine Delights from the Garden of Eden, a wonderful journey through Iraqi cuisine.

Our samoon recipe is adapted from her book in which Nawal invites us to discover this bread seen through her child’s eyes. 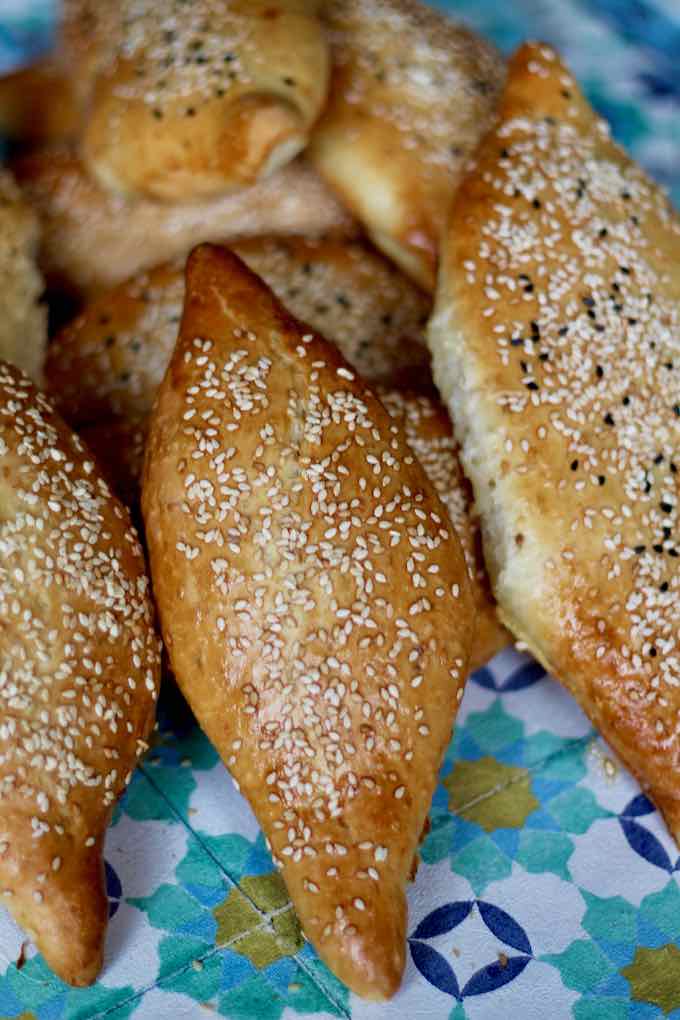 Not everyone has a tandoor in their kitchen. The best alternative is a refractory baking stone.

A refractory stone, baking stone or pizza stone, is a flat, thick material used for baking. It can be square, round or rectangular and its thickness is generally from ½ to 1 inch (1 to 2 cm).

Baking stones are known for their ability to simulate the bottom of a burning wood-burning oven, dispersing heat evenly, minimizing the most important heat points and allowing moisture to perspire from the dough.

The operation is very simple. The stone must be placed on the baking tray or at the bottom of the oven and preheated before actual baking for at least 30 minutes or 1 hour if it is thicker.

When the stone heats up, it absorbs the heat and retains it for a long time. The heat increases evenly, which makes it possible to bake pizza, bread or certain pastries evenly.

The result will be a well-baked dish with a golden, crunchy crust.

Choosing a good baking stone depends on personal needs and cooking habits. The classic stone is made of clay or stone, which absorbs moisture during baking, allowing a crisper crust.

The stone must fit the cooking size of the oven. With a natural gas oven, plan at least half an inch (1 cm) on each side of the stone to ensure air circulation.

In addition, for a bread to bake evenly and cleanly, choose a thicker stone, about 1 inch (2 cm) thick. The thicker the stone, the better the absorption and distribution of heat in the refractory stone, for optimal and uniform baking.

How to use a baking stone?

Stone allows a homogeneous and gentle baking of a dough. However, it requires a certain amount of preparation time:

– Put the stone in the cold oven on a rack.
– Heat the oven to maximum temperature for 30 to 45 minutes.
– Turn off the oven and place the bread or food to be cooked on the stone on a thin layer of flour to prevent it from sticking.
– Leave the stone in the oven until it has completely cooled down.

The heat stored in the stone allows, for example, to bake one or two pizzas without having to turn on the oven again. The same technique can be used on a barbecue, although temperature management may not be as easy.

As for samoon, in the absence of a stone oven or refractory stone, a convection oven with a cast iron pan will be the closest to traditional baking. Besides, I am sharing a recipe with a convection oven.

We tasted these delicious hot rolls with mutabal, labneh, hummus, falafels, all the ingredients of sabich with a small stopover in North Africa for a zucchini ajlouk, a taktouka and harissa. 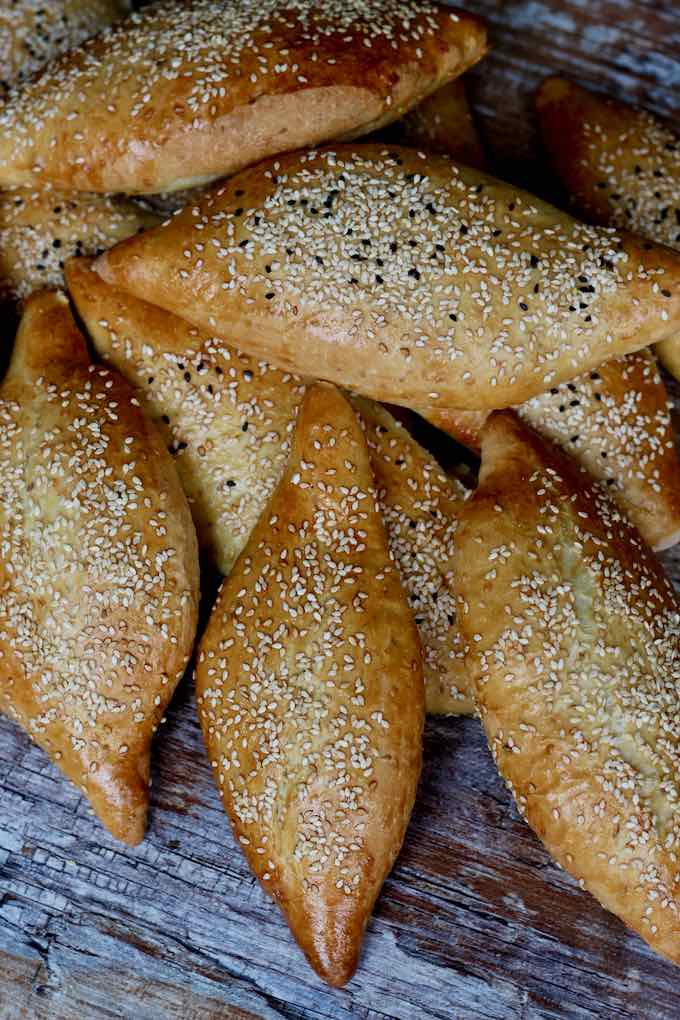 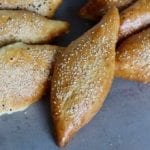