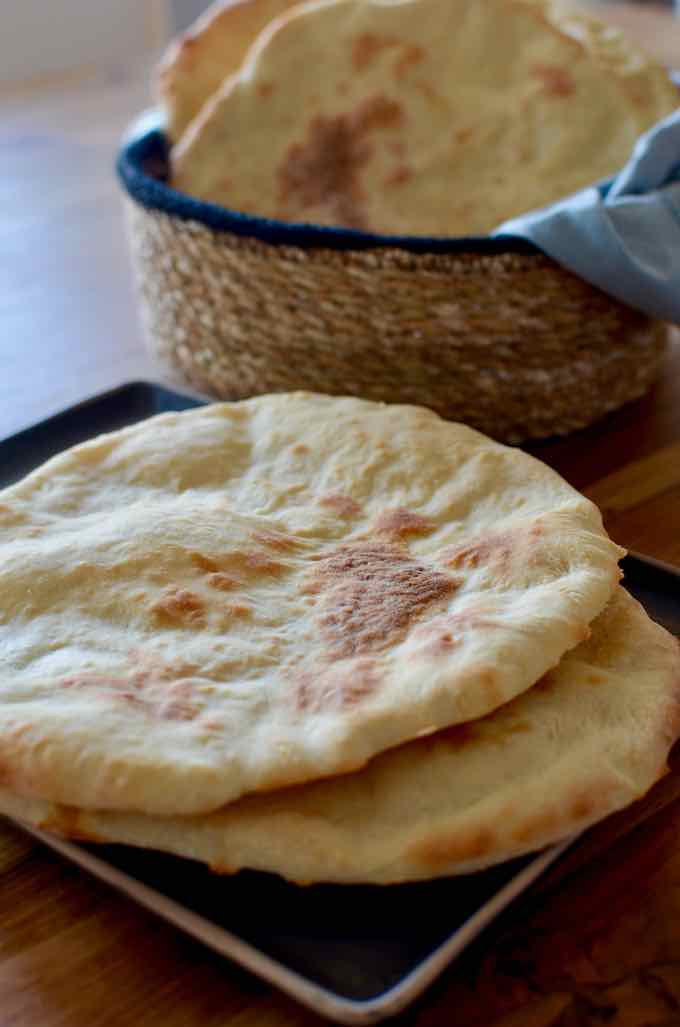 Khubz tannour is a traditional flat bread, popular throughout the Middle East, and in particular in Iraq.

Khubz tannour is a type of flat bread, typical to Iraq and overall to Levantine cuisine.

It is composed of the same ingredients as any other bread : flour, yeast, salt and water.

It has a circular shape, is about 8 inches (20 cm) long, and 1 inch (3 cm) thick. It is characterized by the air bubbles that appear on its surface during baking.

Etymologically, khubz means bread in Arabic, and tannour refers to the clay oven in which it is traditionally baked. It is also called khebez tannour, khobz or khubz mei, this last one meaning “water bread”, which stems from the absence of oil in its composition.

As far as can be remembered, khubz tannour has always been present in the Middle Eastern culinary culture. It is a key element of any meal, and serves as a link between each course and between the different flavors.

Historians have traced back the consumption of flat bread such as khubz to the Sumerian civilization, one of the oldest in Mesopotamia. Some records have even shown that more than 300 types of bread existed at the time. Nowadays, this region covers most of Iraq, which is why khubz is mostly considered to be an Iraqi dish.

French people have baguettes, Iraqi have khubz : it goes with everything and works for every occasion.

In the Middle East, it is common to use khubz as a form of cutlery by folding it on itself to grab and eat food. People also enjoy dipping it in sauces or dips, in hummus or baba ghanouj for example, or stuffed with meat and vegetables so as to make delicious sandwiches.

Covered with muhammara, a traditional sauce made with chilies, khubz tannour could almost be mistaken for pizza. 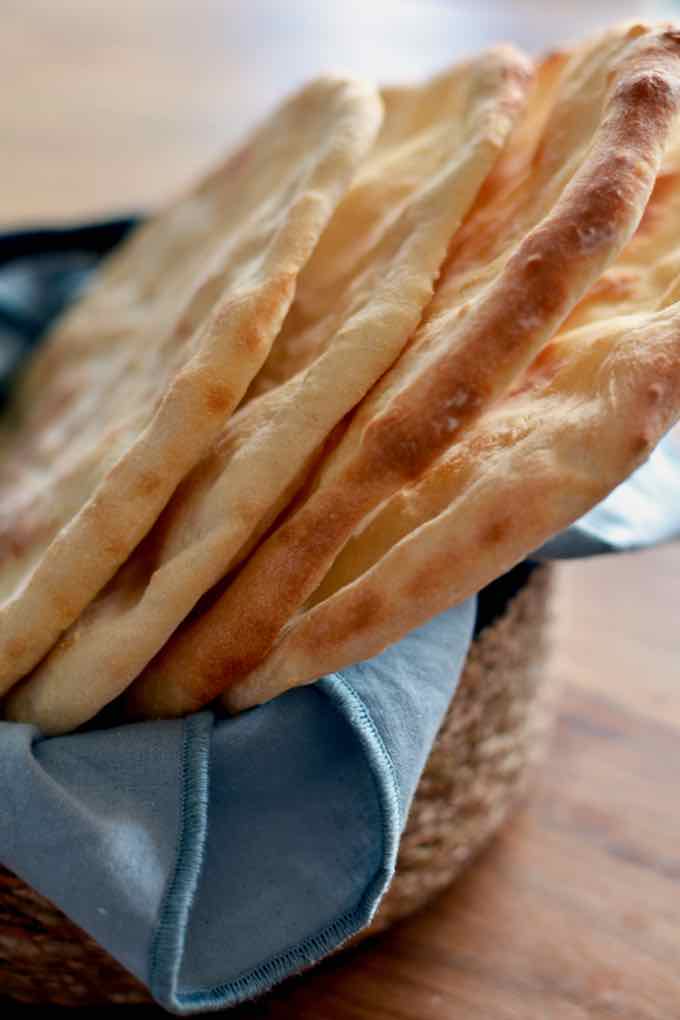 To prepare khubz by the book, following the traditional method, a traditional bread oven called tannour is needed.

The specificity of tannour is its vertical and cylindrical shape, with a base larger than its opening. Usually made of clay, it is about 3 feet high and heats up to extremely high temperatures.

To bake khubz in a tannour, you have to arrange the bread dough shaped in circles on the internal walls of the oven. With the extreme heat, the dough will stay stuck to the walls and will cook very quickly.

Designed thousands of years ago, the tannour oven has barely changed throughout the years. In a family, traditionally, it is customary for the women to bake khubz at home. Even though the advent of bakeries made it more common to get khubz already made, it is still homemade in many villages as of today.

Khubz tannour looks very much like pita, which probably is the most well-known flat bread in the world. Originating from the Middle East, pita is also very popular in the Balkans and in Mediterranean countries.

Even though they are made of similar ingredients, the two breads differ by their texture and the amount of air in them. Whereas pita is very airy thanks to its pocket shape, filled with air, khubz is thicker and softer.

Among the countless flat breads in the world, khubz has many other similar variants.

For example, it is very similar to laffa, a flat bread that can be baked either in a tannour oven, or in a very hot pan. The only significant difference is that its dough contains oil.

In India, Pakistan and other regions of Central and Southeast Asia, meals are traditionally accompanied by naan bread. Even though the composition of naan bread varies depending on the country, the original recipe has eggs and yogurt, which add a smooth and soft texture to it.

In the Maghreb, msemmen is a kind of flat bread, cooked on a cast iron plate. It is more akin to a thick crepe or a pancake.

Man’ousheh is another olive oil bread which is very popular in Levantine cuisine. It is often served for breakfast, with cheese, vegetables, or aromatic herbs. 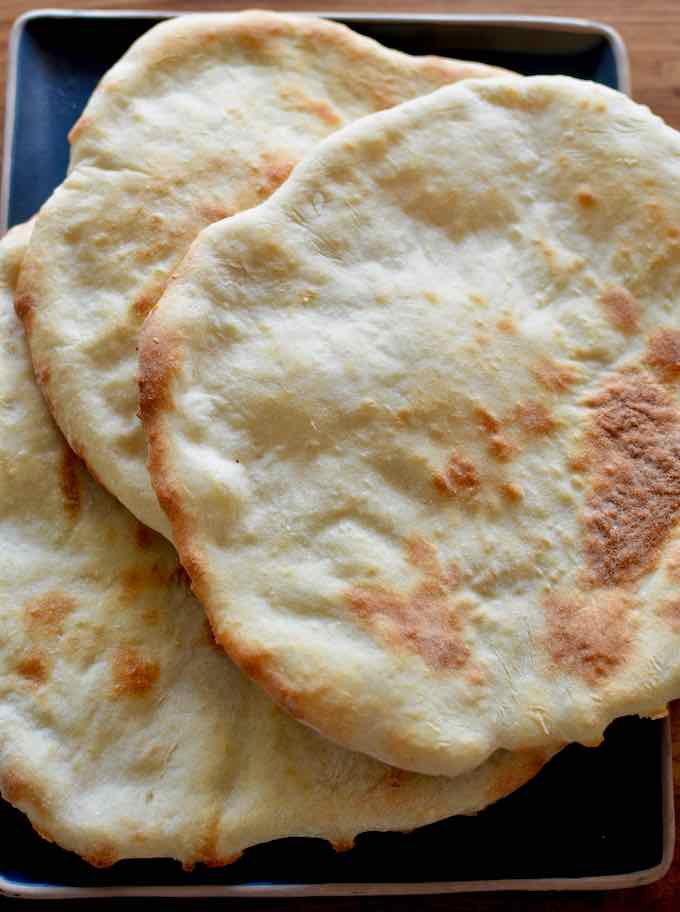 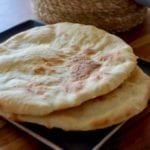 Keep cooled breads in plastic bags to prevent them from drying out.

Freeze for further use any quantity that you will not be able to consume after 2 or 3 days. 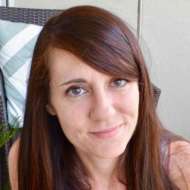 Born in France and passionate about travel, Laurie has spent the last few years traveling in many countries. Thanks to these trips, she made beautiful cultural and culinary discoveries, which contributed to her newfound love of cooking.
Previous Post: « Serbia: Pogača
Next Post: Iraq: Dibis »