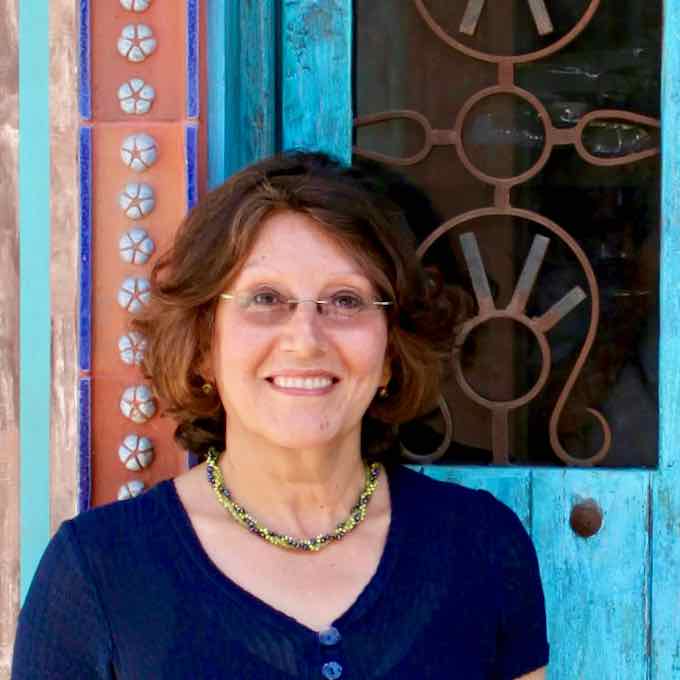 Nawal Nasrallah is the culinary expert for Iraqi cuisine on 196 flavors.

Nawal Nasrallah, a native of Iraq, award-winning researcher and food writer, specialized in the Middle Eastern cuisine, with specific interest in Iraqi food culture and its history. She is the author of the definitive cookbook on the Iraqi cuisine Delights from the Garden of Eden, and English translator of two medieval Arabic cookbooks from Iraq and Egypt. Her recipes have been featured in many magazines and newspapers, such as The New York Times, The Boston Globe, and Food and Wine.

Through her cookbook, blog In my Iraqi Kitchen, and website, she wishes to spread the word about her own delicious and rich culinary heritage.

Tell us more about your knowledge and experience when it comes to Iraqi cuisine.

My love for good food in fact goes back a long way. Growing up in Baghdad, I enjoyed the food my mother cooked for us. I, myself, did not know how to cook the daily traditional dishes — I did not need to. However, I was fond of baking, using my precious spiral bound copy of Better Homes and Gardens. I was the envy of my peers, as such books were hard to get.

To cut a long story short, I learnt the ‘secrets’ of the traditional daily meals only when I moved with my own little family to Mosul, away from home. I was working as a university professor teaching English literature and language. I learnt by trial and error and by asking questions, and with the help of my Better Homes and Gardens, I did manage to build a ‘glamorous’ reputation for myself as a culinary connoisseur among our growing circle of friends who loved and anticipated from my table the ‘exotic dishes’ I used to offer, like mashed potatoes and meatloaf and spaghetti Bolognese and home-made hamburgers, and of course my cakes.

When I came to the United States in 1990 to join my husband who was studying for his PHD, I had to adjust my perspective regarding the uniqueness of what I was cooking. Iraq was always in the news and our new American friends were interested in the traditional dishes I offered — as these have now become my ‘exotic dishes’ — and wanted to know how to make them.

There was not a single Iraqi cookbook at the library that I could refer them to and it did not take me long to decide that I can do it, a cookbook with stories and history. Within the course of my research, I was thrilled to discover that the oldest documented recipes in human history were actually written by my ancestors the Babylonians in Iraq in 1700 BC, and that of the several medieval Arabic cookbooks that survived the ravages of time, two of them were written in Baghdad. I was so much enthralled by these precious culinary sources that immediately after the publication of my cookbook Delights from the Garden of Eden in 2003, I embarked on a self-appointed project, that of translating them into English.

What makes Iraqi cuisine unique? What sets it apart from other Middle Eastern cuisines?

Well, the Iraqi cuisine is kind of differently oriented. For one thing, and irrespective of differences in ethnicity or religion, region, or even social status, the Iraqi daily staple revolves around the dishes of rice and stew, what we call in Iraqi timman wa marga. White rice is usually served with a tomato-based stew cooked with chunks of lamb on the bone and a seasonal vegetable, one day it would be okra — the most popular of all – and another day, it would be spinach, or white beans, or eggplant, or zucchini, and so on. Therefore, it is never boring as it might first sound.

Another thing typically Iraqi, is having pickles with such meals, especially pickled mango, called ‘amba. It is usually imported from India, and I have not seen any other people fonder of ‘amba than the Iraqis themselves, not even perhaps the Indians who manufacture it for us. One reason could be that these daily dishes are usually spiced sparingly.

Iraqi cuisine is also distinguished by its elaborate dishes, mostly stuffed, which are usually cooked less frequently for the family, reserved for feasts and special family occasions, and they are always expected to grace the table for the dining guests. The more labor – mostly of love of course – is involved in making these dishes, the more honored and welcome the guests would feel.

It is also in such dishes that more regional differences in the Iraqi way of cooking can be seen. For instance, the Iraqi pot of dolma (vegetables stuffed with meat and rice) is made with an assortment of vegetables, and not just one vegetable as is done in other Middle Eastern countries. However, whereas the Baghdadis prefer it simmered in clear liquid, cooks from Mosul (in northern Iraq) like to use tomato-based liquid; and Iraqi Christians cook it without meat during the fasting days of Lent.

Another example is the stuffed bulgur dough, called kubba or kibbi, shaped into flat discs, impressively large and thin. This dish is the specialty of the cooks of Mosul, where wheat is abundant; whereas in other regions south of Mosul, where rice is more commonly used, kubba is made with rice, such as kubbat halab, or potatoes, such as poteta chap. A Baghdadi specialty is the dish of grilled whole fish, called masgouf, prepared and served along the banks of the river Tigris.

If you are a lover of hot spicy foods, head southwards to Basra for a scrumptiously spicy biryani rice dish. Basra has always been a key port for the Indian spice trade ever since ancient times. For a Kurdish treat, it could be parda palaw, an enticing bundle of rice-meat mix enclosed in thin sheets of bread dough and baked to beautiful crispiness.

And of course for weddings and even large official banquets, you will always see a beautifully roasted whole sheep proudly centered on a huge tray of rice, sometimes served in multi-colored, white, red (with tomato sauce), green (with herbs), and yellow (with saffron or turmeric). This majestic dish is called qouzi.

All these dishes, even those with rice, come accompanied with the characteristic bread of Iraq, khubuz tannour, which is flat bread baked in the tannour (domed clay oven); and the diamond-shaped sammoun, baked at commercial bakeries in brick ovens called firin. 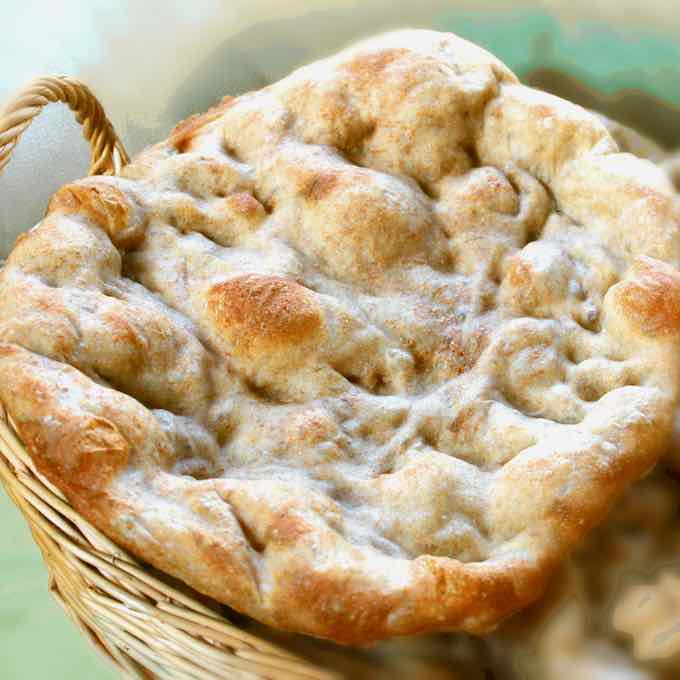 What is your favorite Iraqi recipe?

I have several favorites, but of course time and energy determine how often I can indulge in them. At the top of my list is kubbat hamudh shalgham. It is basically a winter dish, a rich soup, which is a meal by itself: turnip and Swiss chard soup with luscious kubba dumplings made by filling thin shells of rice-meat dough with already cooked aromatic mix of ground meat and onion. I never really had my fill of it when I was a kid. It was a labor-intensive dish as all the pounding and kneading was manually performed in a mortar and pestle. This is now all done in a food processor within minutes. I guess that is why this machine quickly acquired the well-deserved name sitt il-beit (lady of the house) in the Iraqi households. I have a detailed recipe for making this dish in my cookbook. 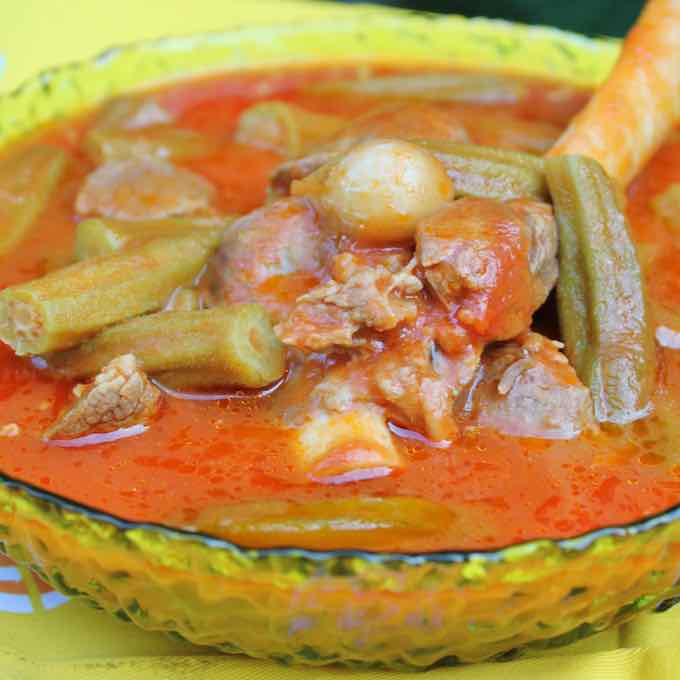 Another favorite, in fact everybody’s, is okra stew with white rice (margat bamya wa timman) with a side of onion wedges and ‘amba (pickled mango).

What is the most unusual dish in the country?

I would say masgouf. It is a Baghdadi specialty of grilled whole fish. Split-open fishes are hung on two sticks and barbecued on camp-like fire along the banks of the river Tigris.

Well, I have always liked good delicious food wherever I happen to encounter it. I usually prepare Iraqi food at home, but I also often make other dishes like pizza and pasta dishes. I make my own version of pesto with almond butter, Indian curries and biryani, Chinese stir fries, and add to these several of the medieval dishes I discovered in the Baghdadi and Egyptian cookbooks I translated into English.

What places would you recommend during a visit to Iraq?

I have never been able to go back to Iraq ever since I left it in 1990.

Other than your mother or grandmother, which Iraqi chef is a reference for you?

I grew up in a large family, and I can only think of my mother as a reference ‘chef’ for me, and even as such it was only be watching her doing things, and not by a conscious effort on her part to give me ‘cooking lessons’; she had her hands full with us all. Later on as I started practicing cooking myself, I learnt a lot by asking friends, neighbors, colleagues for directions of foods I sampled and liked and with which I was not quite familiar.

What are the main difficulties of Iraqi cuisine?

Generally, the Iraqi cuisine is not really that demanding. Almost all the ingredients needed for cooking authentic Iraqi dishes are available in the general stores. It is the cooking techniques that give it its characteristic touch. However, I do think that certain dishes, such as the Iraqi rice dish biryani and some fish dishes, do not taste authentically Iraqi if these two key ingredients are absent: 1) noomi Basra, which is dried lime, and 2) baharat, a spice mix similar to the Indian garam masala.

The techniques that a novice to the cuisine might find challenging at first mainly concern the stuffed dishes, such as the different varieties of kubba, discussed in my above answer. However, I do believe that these can be mastered by practice, and the end result is truly worth it. 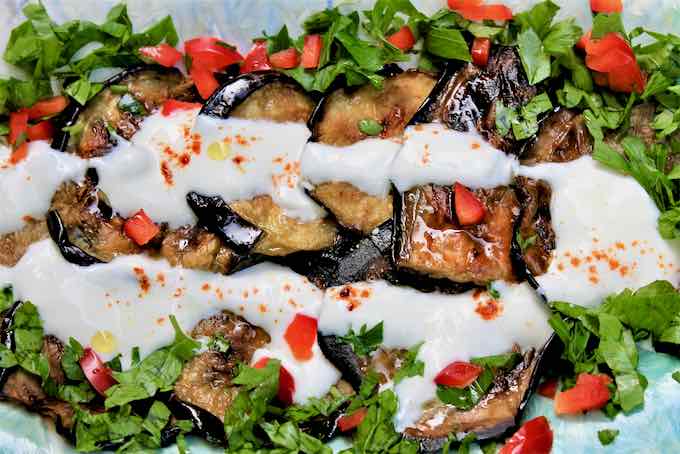 What would you suggest if you had to prepare an Iraqi menu: starter, main course, dessert?

For a starter, I would suggest one of the delicious eggplant small dishes, such as browned eggplant slices with yogurt (msaqqa’at betinjan bi-l-liban).

For the main course: it could be rice and stew (timman wa marga); such as okra stew (margat bamya), fresh fava beans stew (margat bagilla khadhra); the list is long and they are all delicious.

For dessert: I must say that Iraqis in general are great drinkers of black tea, a heavy brew served with lots of sugar; served after the meals and between the meals. This might also be one of the reasons why dessert is not necessarily served as a finale to the meal as is the custom in the West. Occasionally, thickened puddings, called halawa, made with cornstarch, rice flour or vermicelli noodles and the like; or baklawa and zalabiya (fritters drenched in syrup) are served in the evenings, particularly during the fasting month of Ramadan. Iraq is also known for the excellence of its dates, usually consumed fresh during the summer and dried year round.

However, I personally do prefer to have dessert after the meal, light, delicious and unusual. My favorite is halawat sha’riyya, prepared with vermicelli noodles. 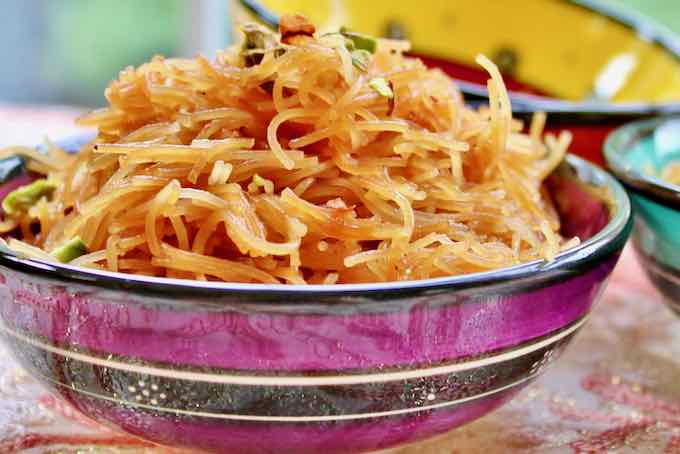 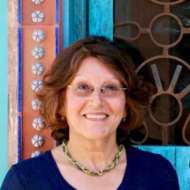 Nawal Nasrallah, a native of Iraq, award-winning researcher and food writer, specialized in the Middle Eastern cuisine, with specific interest in Iraqi food culture and its history. She is author of the definitive cookbook on the Iraqi cuisine Delights from the Garden of Eden, and English translator of two medieval Arabic cookbooks from Iraq and Egypt. Her recipes have been featured in many magazines and newspapers, such as The New York Times, The Boston Globe, and Food and Wine. Through her cookbook, blog In my Iraqi Kitchen and website, she wishes to spread the word about her own delicious and rich culinary heritage.