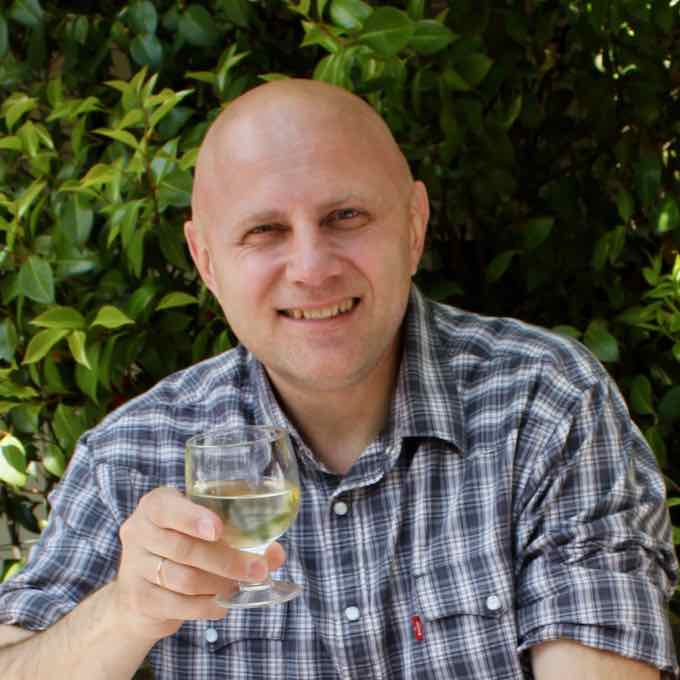 Miodrag Ilić is the owner and Chief Editor of the portal Recepti i Kuvar online, which is a leading registered online media publisher in Serbia.

After only two years of operation, Recepti i Kuvar online received a prestigious award named TOP 50, recognizing the top 50 websites in Serbia for 2015, according to the jury of PC Press magazine.

In early 2017, Recepti i Kuvar online by Miodrag Ilić launched a campaign to collect traditional recipes, the origin of which must be before the Second World War. This project, is unusually important for the preservation of intangible cultural traditions of the people who live in these regions, institutional and organizational supported by the Serbian Chamber of Commerce:

“Traditional recipes of the local cuisine is an important part of the intangible cultural heritage of each nation. The list of elements of the intangible cultural heritage of the Republic of Serbia, in addition to traditional crafts, folklore songs and dances, with naive painting of Slovaks, there are Belmuž, production of Pirot cheese, pazarske mantije (traditional method of preparation of pies in Novi Pazar). These elements are vital to the preservation of national identity, and are also an integral part of various tourism products.

A project to collect and promote traditional Serbian cuisine home recipes through the Recepti i Kuvar online portal and book publishing Traditional Serbian Cookbook, will bring new elements into the tourist offer of Serbia. We estimate that it will allow better visibility of cultural, culinary and customary history of this area, which will aim to better information of individuals and businesses in the country and abroad. “

Tell us more about your knowledge and experience when it comes to Serbian cuisine.

I was born and raised in Belgrade, Serbia. I grew up surrounded by family with a passion for cuisine. My grandfather was a professional chef. Unfortunately I never met him, as he passed away before I was born. But, I heard a lot of stories about him and about his passion to cook. I consider myself a very passionate amateur cook. Always tryin g to get some time to prepare some specific meals, the last few years I have been focused on traditional Serbian cuisine. Three years ago, stories about my grandfather pushed me to start the project of publishing the book Traditional Serbian food and recipes.

What makes Serbian cuisine unique? What sets it apart from other Balkan or European cuisines?

It is different in a sense that it represents a unique collection of cultural and culinary, national and historical diversity that emerged in the past centuries. The mixture of Turkish, Greek, Bulgarian, Hungarian and other cuisines makes it rich and distinctive.

The tradition of Serbian cuisine is very old. One of the oldest Serbian cookbooks is Srbski kuvar by Krusedol Monastery monk Jerotej Draganovic, published in 1855, in the Old Slavic language. Also, one of the most educated people living at the end of 19th and the beginning of the 20th century, Sima Trojanovic (who was ethnologist), published a book called Old Serbian Dishes and Beverages in 1896.

The list of such old collections of recipes, cookbooks, books on customs is very long.

Examples of specialties of these areas nowadays include:

-Vojvodina is notable for dough-based foods, such as breads, strudels, pasta, as well as various kinds of processed meats.
– Central Serbia is known for spinach pies and spit-roasted pork.
– The specialties of western Serbia include smoked meat, while in the mountain regions lamb dishes are ubiquitous.
– Eastern Serbia cuisine is characterized by dry shepherd’s pies, lamb cooked in milk, smoked wild boar meat, janjija with three kinds of meat and various vegetables and homolj kacamak.
– In southern Serbia, very popular dishes include grilled or spit-roasted meat, particularly the famous Leskovac grilled specialities.

However, just to name an example, you can have a good spinach pie in all parts of Serbia. 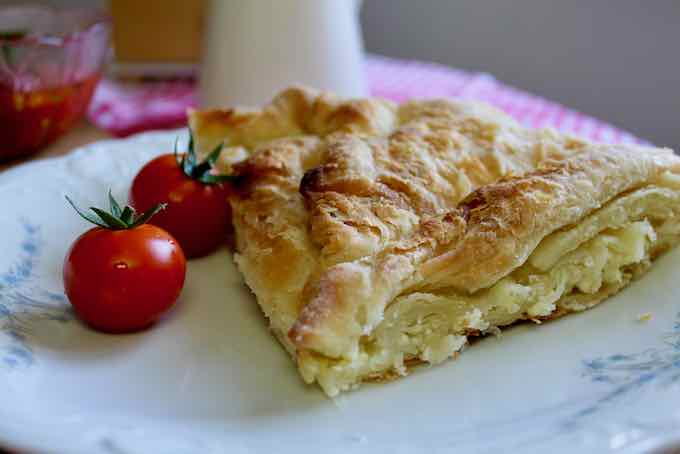 What is your favorite Serbian recipe?

My favorite recipe is a pie, which comes from South Serbia named prpeć (propeć, prpech or propech). Here is the recipe, which is included in my book:

Mix flour and water and keep mixing until there are no lumps. Knead by hand, form a dough ball, dust with a bit of flour and let it rise for 30 minutes.

Re-knead the dough until it is smooth, again form a dough ball and leave for another 30 minutes. Dough should be divided into parts called đuzlems.

First roll the dough into a flat circle 4-5 mm thick.

Brush with a thin layer of lard.

Cut the dough so there is a central circle of about half the diameter of the large circle.

In the outer ring cut 12 flower petal-shaped forms radiating from the central circle.

Now fold these 12 pieces toward the central, round part of dough, always working with the part of dough opposite the last one.

When all “petals” are folded toward the central circle, turn the whole pie crust upside down and let it rest for 20 minutes.

After that, roll the dough with a rolling pin so it is 2-3 mm thick and 40 cm in diameter.

Grease the baking pan (about 28 cm in diameter) with lard and place the dough on the pan so it goes over the edges for about 10 cm at all sides.

Brush the dough with some lard and add full-fat cheese.

Now fold the hanging part of dough over the cheese, folding the dough around the circular parameter. There should be a central circle of about 8 cm that is not covered with dough.

The upper side of dough should be sparsely brushed with lard. Bake in an oven at 450 F for about 35-40 minutes, depending on the strength of the oven.

When prpeć is done, remove it from the oven and sprinkle the upper crust with water. Cover with a kitchen cloth to “rest” for about 10 minutes.

Remark: In Western Serbia there was a similar dish called gologlavica or zeljanica gologlava as it was made of a single pie crust filled with greens. The pie crust would be placed in the baking pan, filled with mixture of greens, and the ends of the dough would be rolled back over the greens so in the middle of the pie there were bare, uncovered greens, and this led to name gologlavica (“hatless”).

What is the most unusual dish in the country?

It’s difficult to say. Maybe unusual dish is ajvar. It is a kind of salad in the category of winter preserves. Again, it is very difficult to translate ajvar, because, similar dishes do not exist in other cuisines. This meal comes from South Serbia mainly, but, every home and every family in Serbia have their own (the best) recipes for ajvar.

We in Serbia usually introduce it to foreigners with this statement: “There’s nothing like homemade ajvar!” This Serbian recipe is one you should definitely write down and know. Your family and friends will thank you for it – that’s for sure. So will your stomach!

Preparation:
Roast the peppers (they must be big and red) and clean the skin before mixing them in a food processor.

Add oil into a large pan and heat it.

Add peppers and fry with constant stirring for about half an hour.

Add aubergine and all seasoning except for vinegar. If you want to have spicy hot ajvar, also add ground chilies that were first baked or boiled.

Fry ajvar for some more time until desired consistency is reached.

For sure, I am influenced by Italian cuisine. Italy is geographically very close to Serbia, and typical ingredients are very similar. Even though Serbia is a landlocked country, we can still say that Serbian cuisine is under very strong influence of Mediterranean cuisine, and a very important part of this influence is Italian cuisine.

My favorite dishes are: any kind of pasta, pizza, and home prepared beef roast. Ten years ago, I had the opportunity to try this Italian homemade beef roast, baked in a village oven. It is very similar to Serbian beef or pork roast, but, also very unique.

What places would you recommend during a visit to Serbia?

If we are speaking about some historical and archaeological sites in our country, it is important to note that Serbia was once the home of ancient civilizations, the birthplace of 16 roman emperors, and briefly even hosted the capital of the Eastern Roman Empire. Lepenski vir, Vinča, Felix Romuliana, Justiniana Prima and Viminacium, must be on the list.

More about of Serbia for anyone who is interested can be found at the official site of the National Tourism Organisation of Serbia.

Other than your mother or grandmother, which Serbian chef is a reference for you?

His name is Uroš Urošević. He is not a TV star, however, he has left a big mark on the development of the cooking profession, both in Serbia and throughout the Western Balkans. Master Chef Uroš Urošević is one of the most respected Serbian chefs who for years has been making great efforts in the development of home cooking and its promotion abroad. Urošević is the first chef from Serbia who has been accepted into the most elite culinary association – the World Society of Master Chefs from London, who thanks to numerous merits, activities and respected members won the title of the most prestigious and leading international association of chefs.

What are the main difficulties of Serbian cuisine?

Not only Serbia, but the whole world is in danger of forgetting their traditional ingredients, traditional dishes, and traditional food preparation techniques. Globalization has contributed to diversity of food offer but also to increased changes in lifestyle, adoption of foreign dietary habits and so-called “nutritive transition” toward the simplified diet with poor nutritive characteristics. 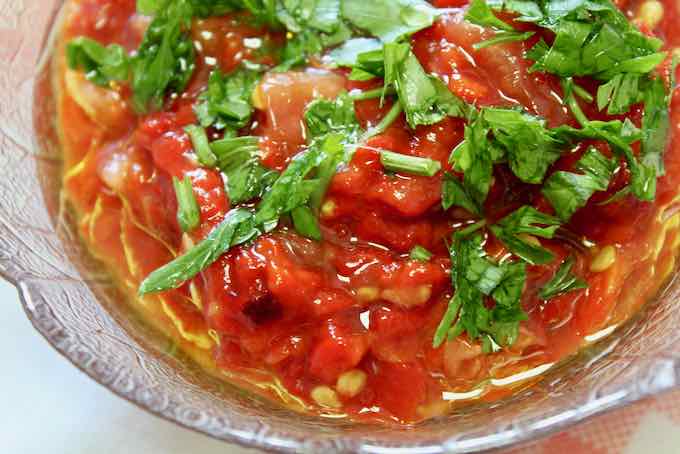 What would you suggest if you had to prepare a Serbian menu: starter, main course, dessert?

This is very difficult to decide! Let’s say this could be my menu:

Dessert: šljivopita, a very tasty dessert made of pitted plums with added sugar and baked in the oven.

The recipes for these dishes can be found in my book. 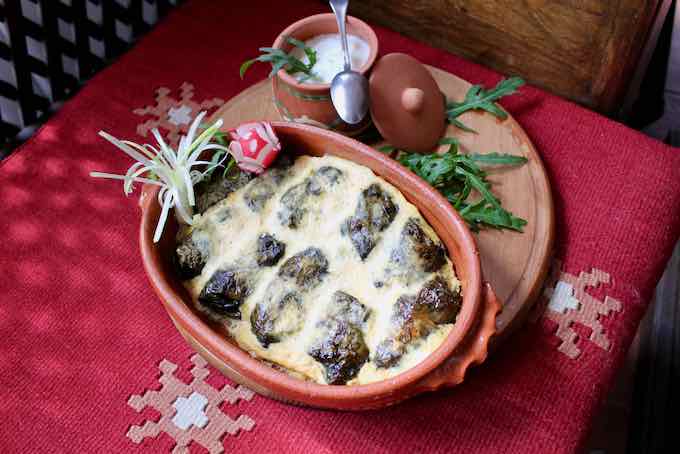 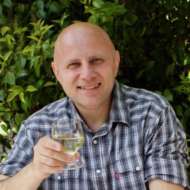 Miodrag Ilić is the owner and chief editor of the portal “Recepti i Kuvar online”, as well as the author of the "Traditional Serbian Cookbook". After only two years of operation, the website received the prestigious award named TOP 50, making it one of the top 50 websites in Serbia for 2015, according to the jury of PC Press magazine.
Previous Post: « Croatia: Restani Krumpir
Next Post: Serbia: Krofne »