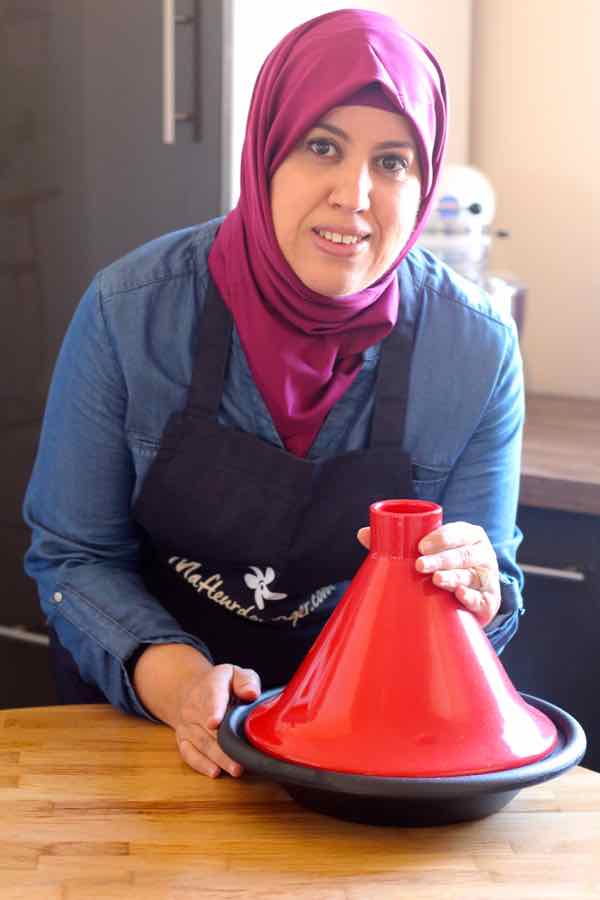 Bouchra is the new culinary expert in Moroccan cuisine for 196 flavors.

Bouchra is married and the mother of 3 girls. Very passionate about cooking, Bouchra has been sharing her recipes and culinary tips across the web for the past 8 years.

She accompanies her readers around the world in their kitchen through her blog Ma Fleur d’Oranger, her YouTube channel, as well as her book where she combined flagship recipes of Moroccan cuisine, her favorite recipes and the flavors of her childhood.

Driven by her curiosity and interest for the different cuisines of the world, along with her Moroccan origins, she has developed over the years a style that combines traditional and modern, while remaining simple and focusing on the taste!

My name is Bouchra. I was born and I grew up in Casablanca in Morocco. I received a degree in Management and Marketing and I worked in the corporate world for several years. In 2008, I decided to stop working with the birth of my second baby and it was at that moment that I had the idea to ​​launch a culinary blog. This blog would allow me to escape a little from my daily routine as a mom through this passion for cooking that always accompanied me since my childhood.
I have been sharing my recipes, my tricks, my trials and errors and my culinary discoveries through my website and my youtube channel for 8 years now, and this gourmet adventure didn’t stop with the virtual as I published my first book, Ma Cuisine Marocaine, about the cuisine of my country that I love, in May 2016.

Tell us about your knowledge and experience when it comes to Moroccan cuisine.

As a child, I always accompanied my mother in the kitchen. I loved this moment of complicity between mom and daughter, although I was just watching her at the time. In my teens, I spent my school breaks collecting recipes in magazines, on cooking shows on TV or on the radio, and that I assembled in a large notebook that I still kept to date. I was mostly testing recipes from all around the world, but rarely from Morocco! I wanted to test recipes that were different from what my mother prepared to us, and it also allowed me to travel through the flavors that were different from what we ate everyday.
Ironically, it was only when I left my family cocoon and went to France that I really started cooking Moroccan. I started looking at Moroccan cuisine differently. For me, it became a way to appease those moments of nostalgia as I am away from my homeland. So I set to replicate all my mother’s dishes, all these tips and techniques from simple to more complicated. To make and remake, conduct research, improve my skills and of course bring my personal touch while sticking to the simplicity and authenticity of flavors. I think that having a food blog helped me a lot from that perspective. 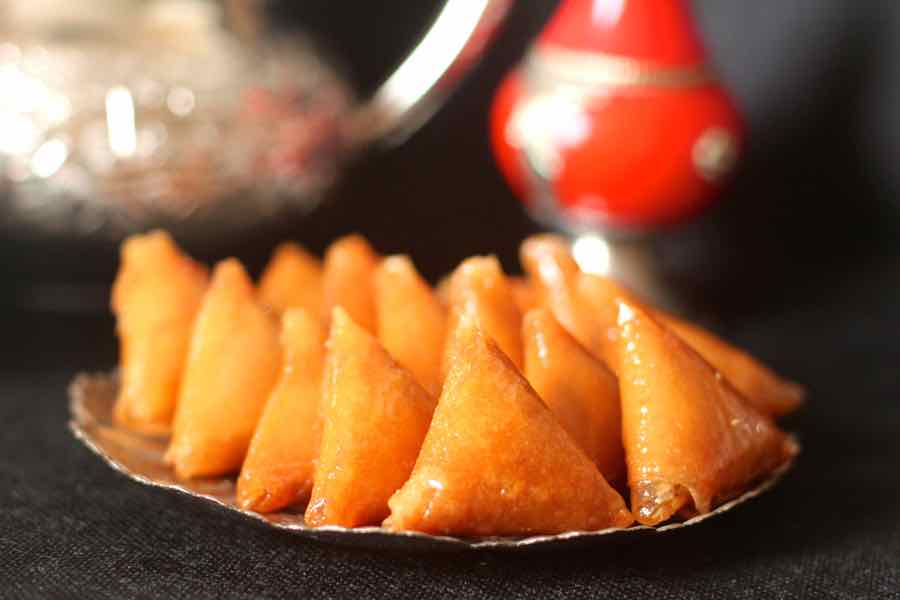 What makes Moroccan cuisine unique? What differentiates it from other cuisines?

Surely its diversity as it draws from the rich and complex history of the country and the different cultures and peoples who lived there, including influences from the Arabs, Jews, Andalusians, Asians, etc. Moroccan cuisine is rich but sticks to simple ingredients. It has the peculiarity of using simple products that are sublimed ​​through a subtle mix of well balanced spices, herbs. It is this ancestral knowledge that distinguishes Moroccan cuisine.

What is your favorite Moroccan recipe or the most unusual dish of the country?

I would say vegetable couscous, a dish that is known around the world. But I also like pastilla, this crisp envelope of thin dough that is traditionally made with chicken and almonds but can be easily adapted based on the season or the ingredients at hand, and it is always good! 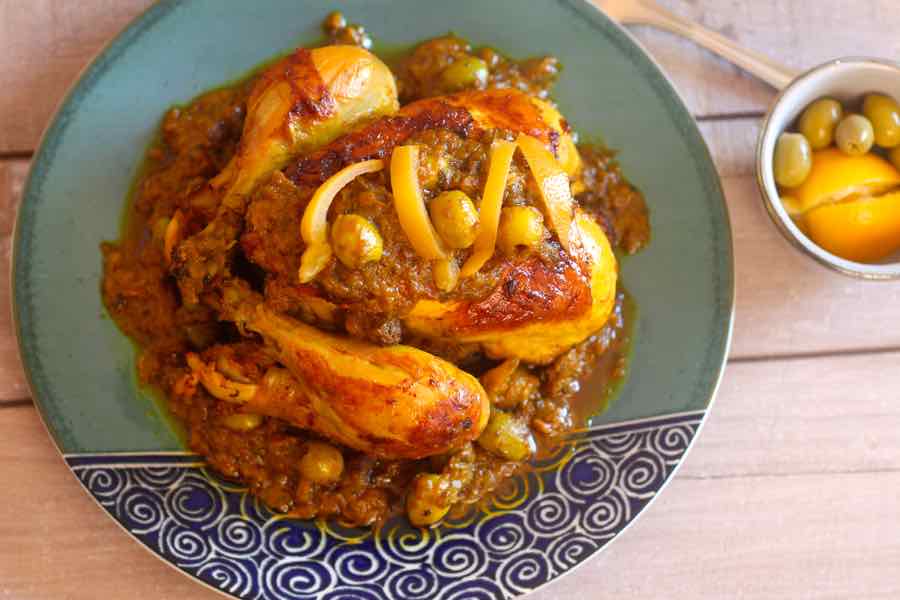 What other cuisines do you like or influence your cooking?

I’m very curious when it comes to cooking. I like to test and try different cuisines. I have a few favorites including Italian, Turkish for savory dishes and I am also a fan of French pastries.

What place would you recommend to visit in Morocco?

Morocco is one of the best gastronomic destinations worldwide. Each region has its specialties and signature dishes based on local products and customs. The destinations that I recommend for someone visiting Morocco and wants to discover an authentic cuisine is the city of Fez, that is considered the capital of gastronomy in Morocco with refined dishes subtly combining sweet and savory. I would once again mention pastilla, mkalli chicken and sweet specialties like corne de gazelle or mkherka. There is also the city of Marrakech and its legendary Jemaa el-Fna square, where you can taste typical dishes like tanjia, or mechoui.

Beside your mother or grandmother, is there any chef from Moroccan (or beyond) who is a reference for you?

There are quite a few famous Moroccan chefs, but I do can not say that there is one who is a reference for me because Moroccan cuisine is a family affair. I would mention however Latifa Bennani-Smires’ book, Moroccan Cooking, which is a true reference when it comes to authentic recipes. A book that has helped me a lot in my early days in the kitchen.

What are the main difficulties in Moroccan cuisine?

If we are talking about real difficulties, I don’t think there are any, but for some dishes that require a unique technique, there might be some difficulty at the beginning. You must see someone do it to learn a new technique. I am talking for example about techniques such as the making of msemens (crepes), folding of briouates, or the shaping of cornes de gazelle. But with a little practice, you will get there.

What would you suggest if you had to prepare a complete Moroccan menu: starter, main course, dessert?

There are so many things! It all depends on the occasion or the season. Since we are in the fall, I would make a tagine with caramelized quince, served with small salads like roasted green bell peppers and tomatoes, and for dessert an orange salad with cinnamon and orange blossom water. 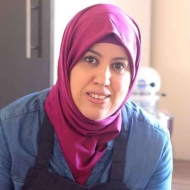 As a great Moroccan and world food enthusiast, Bouchra shares her recipes and culinary tips on her blog "Ma Fleur d'Oranger" since 2009.