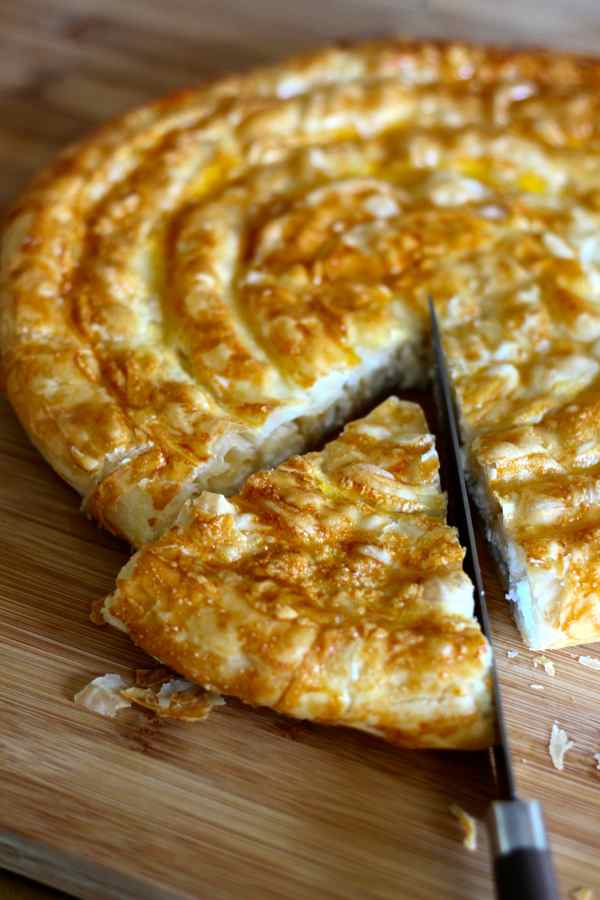 Let’s discover together banitsa (banitza or banica), one of the most popular traditional dishes in Bulgaria.

A Bulgarian legend says that when God created the world, he gave some countries the most beautiful sea, others the desert, others the pastures and the mountains.

When it was Bulgaria’s turn, there was nothing left to give and God took the best pieces of the other countries and offered them to Bulgaria.

People say that Bulgarian cuisine is the perfect reflection of this legend. It is representative of all the cuisines of Eastern Europe and is one of the pillars of Balkan cuisine. It shares a number of dishes with Persian, Turkish, Greek, Russian, and Middle Eastern cuisines.

Bulgarian cuisine, like most other cuisines in the Balkans, is a simple, rustic and peasant cuisine based on ingredients such as vegetables, meat (especially pork), yogurt and cheese.

The Bulgarian word banitsa (баница) derives from the old Bulgarian (гъбнѫти) and means “to lie down”. In Bulgaria, banitsa is a symbol of Bulgarian cuisine and traditions.

Banitsa is a filled pastry that can be sweet or savory depending on the ingredients used.

Today’s recipe is the most popular and classic recipe of banitsa, a savory version based on sirene, Bulgarian yogurt and eggs.

The banitsa is prepared by placing a mixture of beaten eggs and pieces of sirene, in the center of several layers of filo pastry, before baking it.

Sirene (or sirenje) is a traditional semi-hard Bulgarian cheese made from cow’s, sheep’s or goat’s milk and kept in brine. 10 liters of milk produce about 1.5 kg of sirene.

It is a typical product that is ubiquitous at the Bulgarian table and is widely used by Bulgarians in many dishes, hot or cold. It is a slightly friable cheese, which at first sight is very similar to the Greek feta, and even the consistency or even the taste are not very different.

On New Year’s Eve, 10 days after the 40 days of fasting, the Bulgarians prepare the sirene-based banitsa, and fill it with wishes and messages of luck. It is a very popular custom that promises to achieve all goals and dreams and to be happy.

Traditionally, a lucky charm is placed in the heart of the banitsa, such as the trinket in the French galette des rois, and precisely for this New Year’s Eve banitsa.

This lucky charm is called kusmeti, literally “chances”, “fortunes”, or “lucky”. It can be a coin or small symbolic items like for example, and especially a small branch of dogwood, symbolizing health and longevity.

More recently, Bulgarians began to write greetings on small pieces of paper and wrap them in aluminum foil to put them in the center of the banitsa.

Kusmeti symbolize health and longevity. The dogwood branches are hidden inside the banitsa, before baking. Once baked, the banitsa is cut into as many pieces as guests, and each piece contains a branch of dogwood.

Two more pieces of banitsa are cut, one for the house and another for the Virgin Mary, protector of the family. A vow is associated with each branch and the different number of buttons on the branch makes it possible to recognize the corresponding vow.

Wishes include happiness, health, success, etc. The banitsa is then placed at the table, on a turntable, and each takes the piece that is in front of them when the rotation stops.

Then everyone finds the wish that will be answered inside their piece. The most common wishes are “happiness”, “health”, “love”, “marriage”, “birth of a baby”, and “wealth”.

In addition to kusmeti, some add a coin and/or the small pieces of paper mentioned above. 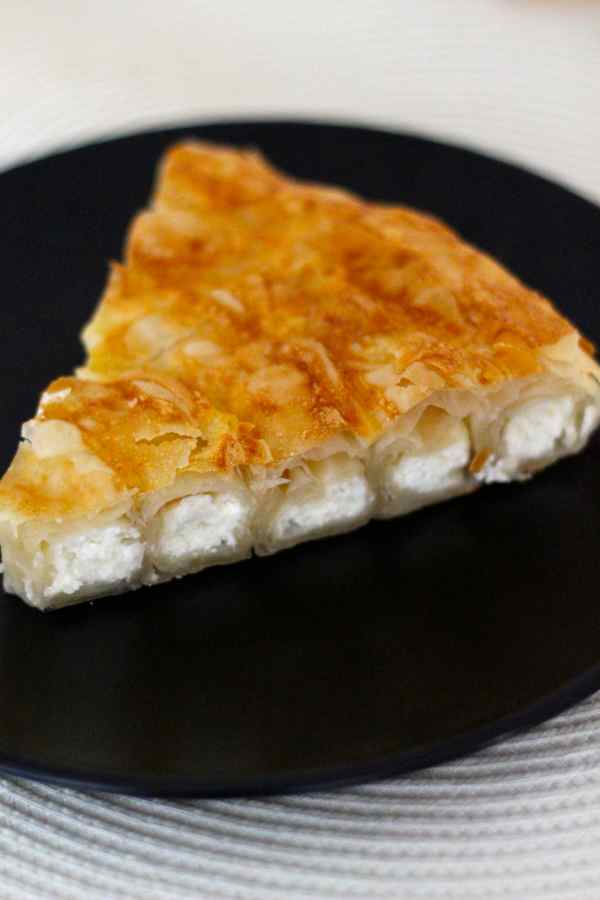 What is the origin of banitsa?

The oldest ancestor of the banitsa is the börek. The banitsa is simply one of the innumerable varieties of börek.

The börek, also called burek, beurek, or bourek, is a savory pastry that is very popular in all the ancient countries of the Ottoman Empire.

Albanians, Serbs, Bulgarians and Greeks had been preparing börek since the Middle Ages. The arrival of the Ottoman Turks, nomads of the steppes of Central Asia, who adopted the Byzantine cuisine, popularized them throughout the Mediterranean basin.

There is a very large variety of börek. They are stuffed for example with cheese, spinach, minced meat (sometimes pork for Christian countries) or potatoes.

The essential ingredient of a börek is yufka, which is the Turkish word for phyllo dough. Börek can be baked or fried. There are also varieties of börek that are boiled in water, called su böreği.

The Turkish word börek refers to a Persian word, bûrak meaning any dish made from yufka.

Additional details are therefore systematically provided to indicate the region of provenance, the type of cooking or the filling:

What are the varieties of börek?

There are several varieties of börek that are very popular in Greece, including:

– Skopelos, a snail-shaped cheese pie for which a long phyllo dough is stuffed with cheese and shaped into snail before being baked or fried.

– Tirópita whose stuffing is exactly the same as that of the banitsa but based on feta and not sirenie.

– Kasseropita contains kasseri cheese and not feta or sirene and, unlike ordinary tiropita, does not contain yogurt.

The Serbian version of banitsa is called gibanica.

In Montenegro, it is called burek and is the most popular fast food in the country.

The Georgian börek is khachapuri.

In Tunisia, brick is only a recipe for börek with an egg inside. The sheets of brick dough are called dioul, khatfa or warka in Algerian and Moroccan dialects.

In Israel, the börek is known as borekass.

The Tatar banitsa is one of the national dishes of the Crimean Tatars, a population of Turkish origin. The Tatar banitsa is called cheburek and is stuffed with minced meat, onions and spices and fried in oil. It is sold in individual size as a snack in the streets of Tatarstan and other republics of the USSR.

In addition to this version of banitsa, there are many variants in Bulgaria:
– Spanachena banitsa, Spinach,
– Tikvenik, with pumpkin, in sweet or savory version
– luchnik, with leeks and onions,
– zelnik, with cabbage,
– mlechna banitsa, with milk in a sweet version,
– kashkavalka, similar to banitsa but filled with kashkaval cheese,
– praznik, with leek,
– luchnik, with onion.

Another kind of banitsa is called tutmanik (тутманик) or poparnik (попарник) and is composed of leavened dough whose traditional filling is cheese.

There are also sweet fillings including, for example, apples, which make this banitsa similar to apple pie or strudel, or pumpkin with brown sugar, nuts and cinnamon. The apple variant is called shtrudel (рудел), and the pumpkin variant tikvenik (тиквеник).

The banitsa with milk, called mlechna banitsa (млечна баница), is prepared by baking the sheets dipped in milk with sugar, eggs and vanilla.

The pumpkin banitsa, called tikvenik, is nothing but a version of the bundevara of Serbian cuisine.

Make a wish! Prepare this banitsa and especially serve it with Bulgarian yogurt, ayran and/or boza! 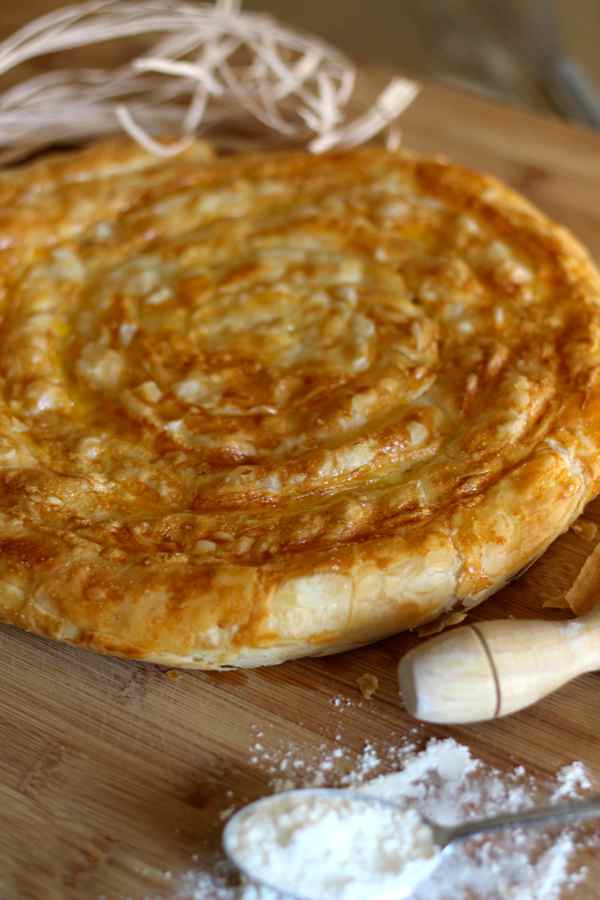 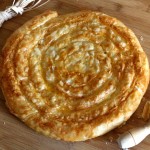 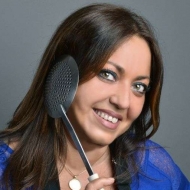